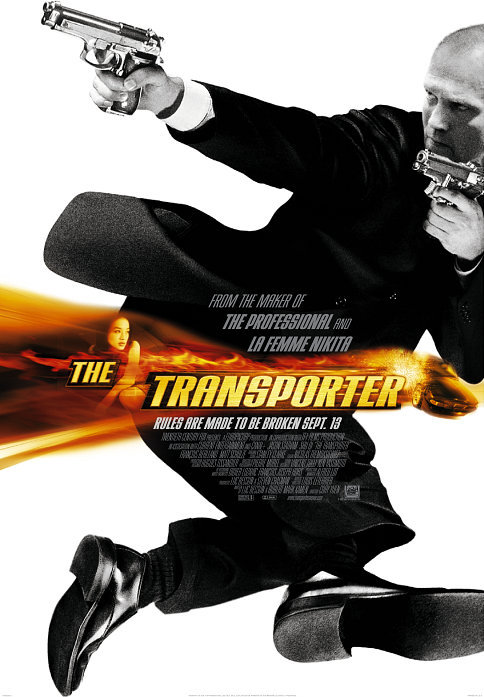 Jason Statham (Safe)… Ok… So this guy… As far as a new millennium action hero goes is really quite good.. I mean he has been pretty good in the, ‘Expendables’ movies, and really just about everything else that I have seen him in!

With that said, he has been doing pretty well for himself for a lot of years now.  There is one movie that I am going to say is what was responsible for catapulting him in to super stardom… That movie being: The Transporter (2002)!

So this is a fun tale… So in this story, Frank Martin (Statham) is a mercenary transporter for hire (basically he is willing to transport anything anywhere for anyone… And as part of his code, Frank has 3 rules… one: never change the deal. two: no names, and three: never open up the package…

And you know what? So far that is working out for him pretty well… That is until his most recent delivery of course!

You see, Frank has been hired to transport a package through parts of Europe by an American… But when the package starts to move… That is when things start going to pot… Because he has broken his 3rd rule and opened up the package!

Inside of it is a beautiful girl… And together they are going to have to find out what is going on so that Frank can protect his passenger… But also so that they can protect each other!

Frank has more then he bargained for when he decides to break his own rules and, ‘open the package’!

I mean say what you will about modern, ‘Fast & The Furious’ style action films, but this movie had it all… A fun cast, a great story, and fun special effects!

So if you haven’t seen it yet, then I highly recommend doing so. I think that you will be glad that you did!