Never the less, I was overly critical of the new millennium, because in all truth, I hadn’t seen very many movies that I could honestly say were, ‘great’ and with the new millennium being marred by the fact that they release inferior (although in some cases still decent) remakes of horror movies that are hard to top, gave me a less then hopeful out look on the future of these two genres!

Boy was I wrong, over the last year or so I have been delving in to Horror and Science Fiction movies, and I have to say that there have been some pretty descent movies to have come out! A few examples of this are, The Texas Chainsaw Massacre remake that was released in 2003, and Prometheus (2012)… And that is to name a few!

Another one that I just recently discovered that I enjoyed was, The Haunting Of Whaley House (2012)!

This movie was a very well created story about the, ‘Whaley House’. You see, this house is supposed to be the most haunted house anywhere… At one point the authorities did some of there hangings on the grounds, it was also at one point a morgue, and the founder Tom Whaley (Tarr) had a daugher by the name of, ‘Violet’ who committed suicide after the man she loved broke her heart… A very full house of the. ‘dead’!

Well at this point the house is now a tourist destination where people go to get tours on a regular basis by, ‘Penny Abbot’ (Greco), and during these tours this house will see one more historically significant event! 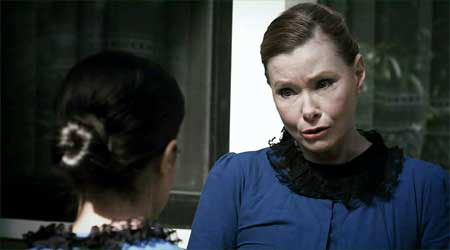 Bethany Romero (Played by: Lynn Lowry), as she is laying out some of the ground rules for young, ‘Penny Abbot’ (Played by: Stephanie Greco), one of the younger tour guides at the, ‘Whaley House’!

You see during their last tour, one of the tour attendees goes insane after she notices the ghost that seems to be moving around!
After this guest is taken away, and after Penny and her boss, ‘Bethany’ (Lowry) close up for the night, Penny meets up with her friends, and they all arrange a hauntingly good time with the Whaley’s at their house at a party where they will never forget… And may end up becoming the new attractions at America’s #1 most haunted destination!

This group of friends are invited to a party that they will never forget… Or leave from!

Now the truth is, is that the best thing I think was the acting! I mean the wealth of talent from these relative unknowns just completely blew me away (a lot of times in these new millennium low budget (or at least low budget appearing) horror movies, there is usually at least one if not more of the talent that brought down the movie to some extent,) the truth is, is this movie has that, but the talent was so good that it really didn’t in the end negatively impact the movie to much!

The last thing that I wanted to say about this movie that I found that I really liked, is that with a few exceptions, for the most part this movie reminded me a lot of why low budget shlock camp of the 80s was so awesome!

In the end this movie has a rough beginning, but if you are a fan of campy horror like I am, then stick with it, you may be pleasantly surprised with just how truly good this movie is! (I was!)