Wes Craven And What Happened With The Series That Made Him, ‘A Master Of Horror’! Wes Craven on the set of the first, ‘A Nightmare On Elm Street’ with Robert Englund in full on, ‘Freddy Krueger’ makeup!

And so why did we not see more of  Mr. Craven’s influence as the series developed? I mean he did a pretty fantastic job bringing us the possibility that our worst nightmares could come to life, so what happened to him?

Well first off, the original movie ended a lot different then Wes Craven had intended it to end… The original idea was not to have Nancy (the heroine of the first movie,) attacked in another dream with all of her friends, and her mother being murdered by the monster, but to have a happy ending to a one hit power house! 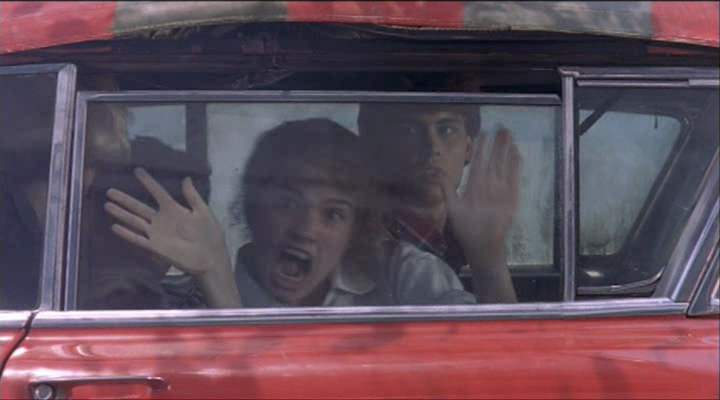 This ending was not the ending that Mr. Craven had intended…

Another thing is that Mr. Craven was displeased with the direction that Newline was planning on taking with the second film… What I mean by this is that the original idea was to have Freddy (Englund), murdering the elm street children in their dreams…

Well with the new movie, we had Freddy having to use a host body to come in to the real world, with that premise being pushed forward though, and changing the basic concept of the first movie, along with the changes made to the first movie in general, Mr. Craven still gave some creative input in to the movie, (including: having some of the focus be shifted from Jesse (played by: Mark Patton), to Lisa (Kim Myers), and the size of the final scene of the movie.

Well the truth is, is regardless, that movie is still today widely regarded as one of the lesser movies in the series, (For me I do think it was largely the changes that had been made in the premise between the first and second films… The second is good, but it could have been so much better!)

A good film, but definitely one of the lesser entries in the series!

The 3rd one was a great example of a power house player coming back (even if it is just to write the movie and not direct it,) you see, A Nightmare On Elm Street: Dream Warriors (1987), brought back Wes Craven to write it, and for Heather Langenkamp to come back as the lead character from the first movie… Despite the fact that this was another attempt for Mr. Craven to bring back his originally intended premise for the film (to be a one hit power house… Or by this time a 3 hit wonder.) This movie would go on to become so popular that it would continue to spawn even more sequels!

Well for the next few movies Mr. Craven had nothing to do with the movies, that was until he was given approval for his original idea for the 3rd movie, and at that point he completely headed back in to the series entirely, having wrote, directed & had a small role in the movie… That movie being, Wes Craven’s New Nightmare (1994)!

Since then unfortunately Mr. Craven was not involved in the remake… (A movie that suffered horribly,) and now that he has passed away, he will never be able to come back to the series…

Now there are other reasons not mentioned above that why he had animosity with the series, I think that a lot of Mr. Craven’s vision for the series never really came to fruition entirely (including having only one movie, etc…)

In a way you can say that it is a good thing, because there were a bunch of great sequels to the first one in the 80s, and we may never have gotten that, you can also say that it was a bad thing as well… Because all good franchises must eventually come to an end… I mean if they don’t then eventually they get cheesy as hell, (a phenomena that the, ‘A Nightmare On Elm Street’ franchise was not immune to…)

Ultimately though, where he was involved in this series, those movies were universally FANTASTIC! And his cinematic genius, (not just in these movies,) will be missed!