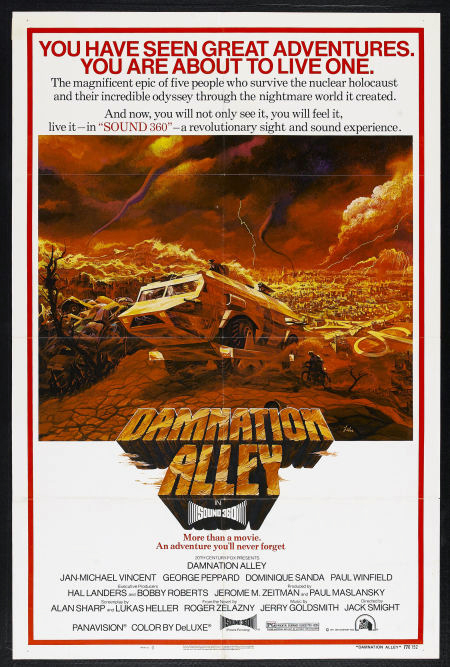 One of the fun things I have discovered since I have been writing for AwesomeBMovies, is the awesomness that are, ‘B Movies’!

What I mean by this is that before I got in to writing for ABM, I didn’t fully understand what a B movie was… I mean I knew of them, but I didn’t full know what they were, and I had never even heard of an exploitation movie before I started writing for ABM, but I have to say that if you hear some one tell you, “If it is a B Movie, then it is going to suck!” Watch one for yourself, trust me when I say that you will not regret it… But that is to come!

“There are areas of radiation we couldn’t get through. It’s not a matter of wrong turns though – “Damnation Alley” is a hundred miles wide a lot of the way.” – Major Eugene Denton (A quote from: Damnation Alley (1977)!)

This movie told the story of how during the height of the cold war between the, ‘United States’ and the, ‘Soviet Union’ tensions heighten to a point where they end up in a nuclear war together!

After this time, the survivors of one of the nuclear silos are just trying to get by in the new world, still essentially living with the same type of military discipline that they had before the nuclear holocaust… With a few obvious exceptions…

During this time, a soldier (one of the soldiers that had been responsible for launching some of the nukes by the name of, ‘Tanner’ (Vincent), and a guard friend of his, ‘Keegan’ have both left the military, as well as Major Denton (Peppard) and a fellow soldier are building the ultimate all-terrain vehicles to make it to Albany, New York (A place they believe may have more survivors.)

Essentially the military installation is falling apart with out a, ‘military’ or a, ‘government’ to lead them…

When an accident basically destroys everyone except for Tanner, Denton, Keegan and Denton’s partner on the behemoth all-terrain vehicles, they form up and take off across what is left of the country, finding survivors and adventure on their way to Albany and salvation!

Denton, Keegan & Tanner as they are making their way through, ‘Damnation Alley’!

Now for the reasons why I have found that I really enjoy B-Movies & exploitation movies… Well this movie is a great example, this movie has some phenomenal talent in it that honestly rivals just about any of the A-list talent from back then (and in a lot of ways, now!)

The stories for these types of movies (including this one), are often absolutely engrossing, and will keep you on the edge of your seat.

Also I thought that I would mention a couple of interesting things about this movie is the fact that even though Roger Zelzany (the guy who wrote the original story for this movie,) was not a fan of the movie, this movie was the big sci-fi hopeful for 20th century fox that year, even more so then, ‘Star Wars’ was that year! And well even though Star Wars is probably one of the most well regarded science fiction/fantasy franchises of all time, this movie has maintained a cult following for decades!

Another thing that I thought that I would mention here is the, ‘Landmaster’… Just this vehicle alone is so popular that it was a Southern California staples for decades after the release of the film, having been a landmark next to, ‘Dean Jefferies’ auto shop until it was purchased in 2005! Another thing about this truck that I thought you guys might be interested in is the fact that this truck has it’s own filmography, having had cameos or been in other movies, tv shows, music videos, etc.. 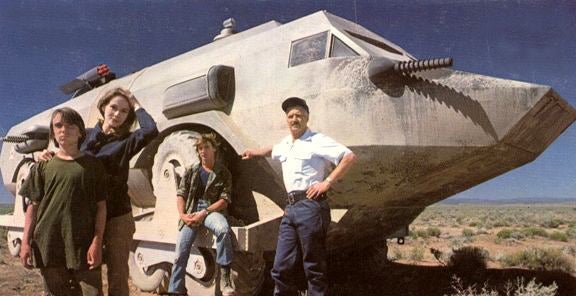 This truck is almost as famous as the actors working with it in Damnation Alley!

And finally I thought that I would mention that legendary film composer, ‘Jerry Goldsmith’ (Twilight Zone: The Movie) also did the music for this movie as well!

Anyway, if you haven’t seen this movie yet, do so! I found it an amazing good time, and you might find that also!