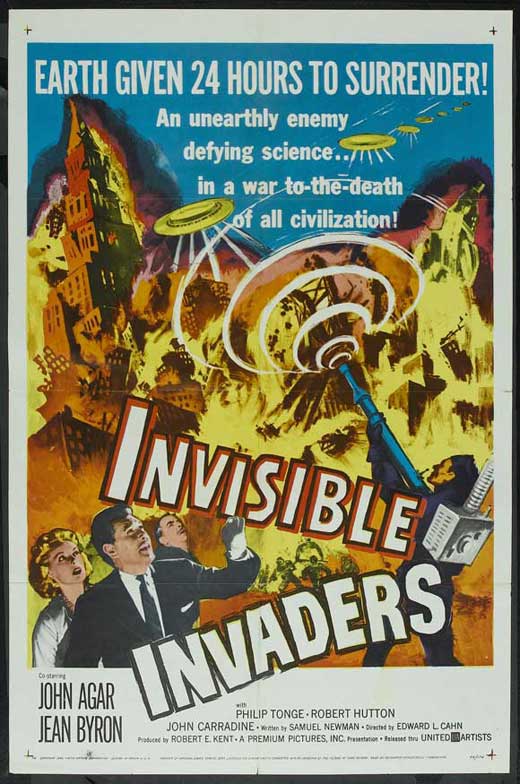 Written by: Samuel Newman (The Wizard Of Baghdad) & Directed by: Edward L. Cahn (It The Terror From Beyond Space). Starring: John Agar (Attack Of The Puppet People), Jean Byron (The Patty Duke Show), Phillip Tonge (The Earth Is Mine), Robert Hutton (They Came From Beyond Space), John Carradine (Stagecoach), Hal Torey (The Cosmic Man) & Paul Langton (The Snow Creature).

Now this one is an interesting one, you see, this movie tells the story of how an invisible Alien Scout comes to Earth and inhabits the body of Doctor Karol Noymann (Carradine), who then goes ahead and goes to the home of Doctor Adam Penner (Tonge) to warn him that if the nations of Earth don’t surrender, that they will end up fighting a loosing war against an invincible (and for the most part invisible) foe, and that he has 24 hours to convince all of the governments of the world to undertake this amazing feet!

Well of course no one initially believes Penner (including his old friend and daughter), but when time is up, time is up, and the invaders come to Earth with the intention of taking it over and exterminating humanity!

The only hope at this point is Doctor Penner, Doctor John Lamont (Hutton), Penner’s daughter, and a Major in the Air Force by the name of, ‘Jay’, who end up holed up in a bunker inside of a mountain trying to find a solution that will finally give the human race an upper hand in trying to destroy these Invisible Invaders… Because if they can’t then no one can…

If these people can’t do something, then the world is doomed!

In the end, I found this movie to be pretty awesome! I mean I suspect in some ways (rather directly or indirectly), that this movie was at least part of the inspiration for such movies as, Night Of The Living Dead (1968), and Maximum Overdrive (1986).

What with both movies having to do with elements from outer space bringing things to life, (In Night of The Living Dead it was the dead that were brought back to life, and in Maximum Overdrive it was electronics and cars and the like…)

I also wanted to pay special props to John Agar… I mean I have seen more than a few of the movies that he has been in now, and one for one he has never stopped amazing me, what with bringing talent to all of his movies that I hate to say it, but is at a level that you just don’t see anymore!

I thought this movie was pretty awesome, and if you check it out, you might think so to!