If you are a horror fan, then there is nothing cooler then watching a fun 80s slasher movie in the middle of the night on a quiet evening! I mean you got the thrilling atmosphere, so that when it is quiet, it generally tends to seem to quiet… And with the right type of horror movie on the tube… Forget about it!

The only thing that would make this whole thing better for me is to have some really buttery popcorn or a pizza with a big 2 liter of soda!

Well I didn’t have the food or drink, but I did have the atmosphere, and a classic 80s slasher movie (a type of movie I haven’t seen in to long,) and this one is a great example of what made 80s slasher horror movies so great!

The movie I am talking about is: My Bloody Valentine (1981)!

“Roses are red, violets are blue, one is dead, and so are you.” – Mabel Osborne (A quote by: Patricia Hamilton from: My Bloody Valentine (1981)!)

One of the things that I found that I really enjoyed is the cast! Besides the fact that it is always fun to see some of the actors you have enjoyed from other movies in some of their earliest works (as is the case with: ‘Alf Humphreys’ and, ‘Helene Udy’ both people I have intentionally (or in the case of Helene Udy, unintentionally) have been following periodically since the 1990s. besides all of that, it is just fun to see some great, ‘B’ talent, who should have become, ‘A’ talent, doing great jobs! 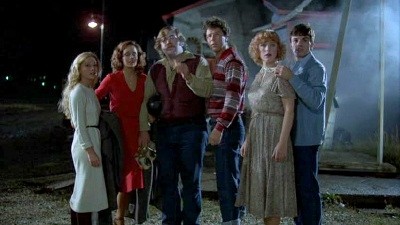 An awesome cast, that did a great job making a fun/scary film!

Another great thing about this movie… The story!

You see, this movie tells the story of how during the Valentines Day dance in 1960 (an event that up to this point was an event that was celebrated by just about everyone in the small town of, ‘Valentine Bluffs’ celebrated,) a massive incident happen…

What happened… Well due to two supervisors of the town’s local mine being impatient to get to the celebration, a handful of miners are trapped in a cave in for six weeks.

When the towns people finally make it to the miners, only one of them has survived… That being Tom Warden (Played by: Peter Cowper)!

The thing is… Is Tom, after being stuck in the mines, has gone insane, and had eaten his fellow miners in an effort to stay alive…

Well after he is rescued, and due to a series of murders he commits in the name of taking down Valentines Day, the townsfolk of Valentine Bluffs decides to stop celebrating the holiday.

Is this Harry Warden? Or has some one decided to take his place? Either way… This guy seems to be demonstrating the frustration of being dateless on Valentine’s Day!

Well 20 years later, most of what happened has become just a distant scary story… And with the town preparing for their first Valentine’s Day in 20 years, it appears that the murders in this small town have begun again! Has Harry come back to stop the festivities? Or has some one else taken on that responsibility?

Ultimately you guys, this movie was a total blast… As a matter of fact, it was so good, that it lead to a 2009 remake starring: Jensen Ackles (Supernatural), and if you haven’t seen this movie yet, check it out! You might like it! I know I did!