Roger Corman… What can I say about the guy? With almost 400 hundred credits to his name, Roger Corman is a real power house Producer! Now I found out just how much of a superstar he is in the producers realm a few years ago when I came to discover the Slumber Party Massacre/Sorority House Massacre series (My Wife still laughs at me when I tell her that not only do I still have those 2 series, but that I actually am still rather fond of them as well!)

Since then though, those are the only movies that I happened to see that the man produced, and as a matter of fact, I hadn’t really even thought about his work after watching the last of both of those series…

Of course this was until recently when I actually had the opportunity a few years ago to meet Roger Corman in person! And decided to take a little bit of a closer look at his legendary work!

I Escaped From Devil’s Island, tells the story of Lebras (Brown), Lebras was sent to a French Prison after he committed murder.  Now for years Lebras has been waiting and waiting inside of that French Prison, waiting to be sent to his death!  Well his wait is over, you see Lebras’ turn has come up, and he is next in line for the Guillotine!

During this time, Lebras is panicking, he is also not really even sure what he is going to do, except to attempt to murder the guards that are coming to execute him! He even mentions this to a man by the name of Devert (George)…

Despite being a Communist, Devert is also a pacifist as well, so when the guards come in to the cell looking to corral Lebras.  Devert panics and decides to let the Prison Guards in on the fact that Lebras is planning on going down fighting!

This of course leads Lebras up to the Guillotine. Once Lebras is up there though Major Marteau (Played By: Paul Richards) comes up to the platform and informs the entire area that because of the end of the War, that all Prisoners that had been sentenced to the Guillotine are being granted a special ‘Amnesty’ in which everyone will be sent off to Devil’s Island to be used for the rest of their lives as slave labor! 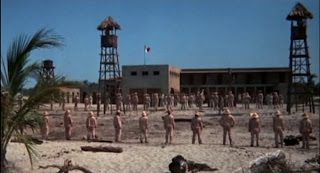 Now Devil’s Island is basically the French equivalent of Alcatraz, except for being a hell of a lot worse!  What I mean by this is that even though the waters off the coast of Devil’s Island is more geared toward Tropical temperatures, they are still infested with sharks and other Predators, while the land is infested by Guards, also, it is a long way from the Island to anything else! With that said, a  few people have tried to escape the Island (Of course no one has ever succeeded).  Also, I did forget to mention that the slave labor force on the Island seems to be some how digging up and packaging salt!

So Lebras, along with the help of Devert, Jo-Jo, and Dazzas, build this raft so they could set sail for their ultimate destinies! 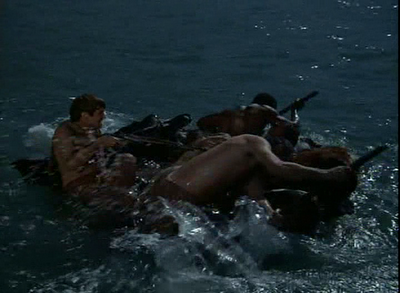 What I like about this movie and what I think makes this a totally Awesome B Movie is:

1. The way they set up these conditions in the movie is just awesome! What I mean by this is from the deplorable living conditions, to the sadistically brutal Prison guards.  Director William Witney really does a brilliant job in describing the harsh living conditions that explains why at least 3 out of 4 of these people want so desperately to leave! (Devert, wants to stay so that he can remain with his comrades in hopes that him and his communist party are pardoned by the government in France.)

2.  The next thing that I gotta say that I really loved about this movie is the scenery in the film.  If your a fan of tropical scenery then I think that you will find this movie to be very visually stunning!

3. The last thing that I wanted to say, is that I really found this movie’s cast to have done an excellent job! Everyone from Jim Brown as the basically, Tough as nails loner, to Christopher George, as a contradiction in that he is both a Communist and a Pacifist.  Literally everyone in this film in my opinion did just a truly superb job!

With that said folks, if your looking for a fun little Prison escape movie, that will take you through portions of Humanity that we as American’s usually would not see (and in some cases don’t see anymore period.) Then I highly recommend checking out this film.  I think you might find that you will really like it!