Weekend Box Office Report: Elysium… A Hit In The Stars… A Hit Down To Earth! ‘Elysium’ is the under dog that made it to the, ‘king of the screen’ with a number #1 spot in this weekend’s box office!

It is rare when you hear that a movie is generally going to be bad… As a matter of fact, short of the forecast by fans, I don’t think I have ever heard of a movie being predicted so badly… Especially with how, ‘Elysium’ was being predicted to be so horrible! (You would almost think that Elysium (2013) was going to replace, Plan 9 From Outer Space (1959) as the worst movie all time!)

Boy was that wrong!

According to: Box Office Mojo, Elysium (2013), a movie which stars: Matt Damon (Bourne Ultimatum) Jodie Foster (Silence Of The Lambs) & William Fichtner (Contact) is the surprising super star of the summer blockbuster run this year, having pulled in an impressive $30,400,000 in this weekend’s box office, making it the number #1 for the weekend!

At number #2, and doing quite well for it’s opening week, we have, We’re The Millers (2013), with $26,555,000 in this weekend’s box office, this cute little comedy romp has gracefully made it in to the second place spot!

At number 3 we have another weekend opener in the Pixar created animated comedy, Planes (2013) which made a spectacular $22,525,000 in this weekend’s box office! And next we have another movie in it’s first week, with the sequel to the highly successful 2010 masterpiece, Percy Jackson & The Lightening Thief (2010), with, Percy Jackson: Sea Of Monsters(2013)! With $14,600,000 in this weekend’s box office, it looks like Percy Jackson: Sea Of Monsters has just managed to squeeze in there! And last but certainly not least we have last weeks #1 with the movie, 2 Guns (2013) With $11,128,000, it looks like 2 Guns is managing stay in there with a decent 5th place ranking! 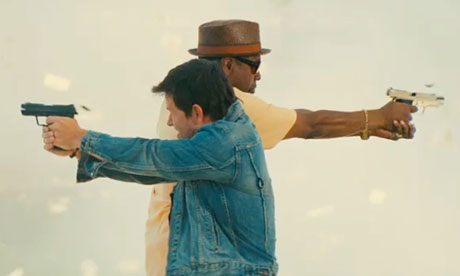 ‘2 Guns’ has continued to hold in there at 5th place in this weekend’s box office!

And with a week of mostly new releases in the top 5 for the week, it looks the under dog is king of the screen!

For more information on this weekend’s #1 in the box office, please check out this trailer for, Elysium (2013):