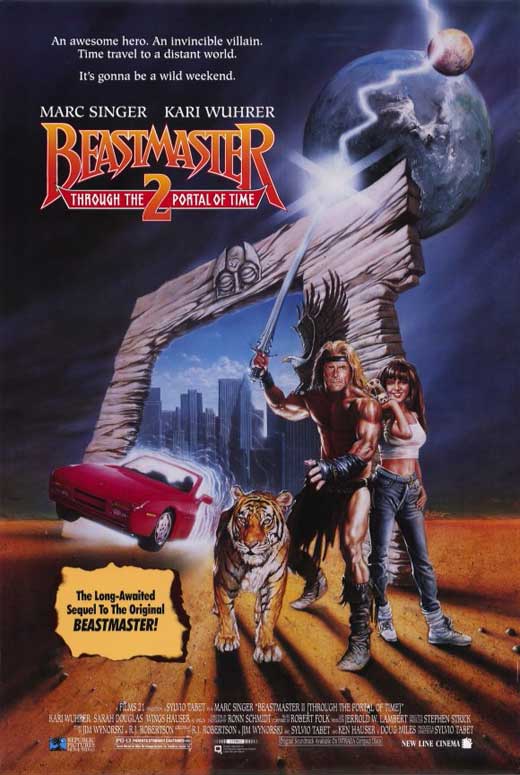 You know part of the reason they were so good is the fact that they had a lot of what made adventure movies so fun… They had action, damsels in distress, etc… All set in a more medieval (or medieval-esque…) setting… And of course they have witchcraft and sorcery… All tied together in a nice, neat story!

And you know what? That is at least part of the reason why, Beastmaster 2: Through The Portal Of Time (1991) was so much fun!

Now before I begin, I hate to say it, but this movie was sort of my introduction to the series… A fun movie, but because I haven’t seen the first one yet, I am not sure exactly the events that preceded this one…

Either way, the sequel tells the story of how after the events of the first movie that a power vacuum was created, and was eventually filled by the mad/power hungry dictator, ‘Arklon’ (Hauser)… And during this time Dar (The Beastmaster) (Singer) and the rebels are doing everything they can!

But when his army smashes a force of rebels that had been sent to smash Arklon’s army, he himself destroys that force… (all except for a witch by the name of, ‘Lyranna’ (Douglas) who has figured out how to cross the dimensions from theirs in to our world)..

Now Lyranna offers to help get Arklon over to the real world and steal a Nuclear bomb to use to crush the opposition in his world, the only catch is that he has to marry her and install her as his Queen!

Arklon (Hauser) as he is adjusting to the new world…

So after, Jackie Trent (Wuhrer) ends up accidentally leading some cops and herself in to the Beastmaster’s world, both she and Dar will end up learning of their plot and traveling to L.A. to stop Arklon and Lyranna from obtaining a Nuclear weapon and bringing it to his home dimension!

Dar (Singer) and Arklon (Hauser) fighting over the fate of 2 Dimensions!

The only problem is that… Well… Arklon and Dar stick out like sore thumbs and will have to avoid getting caught by the Police and the U.S. Army at all cost!

And before I forget I wanted to mention the fact that horror movie legendw, Rober Z’Dar (Maniac Cop) and Michael Berryman (Weird Science) both make appearances in this film!

The last thing that I wanted to mention here is the fact that I suspect that atleast to some extent that Kevin Droney (Wing Commander) was atleast partly inspired by the story in this movie when he was writting, Mortal Kombat (1995), and the reason that I mention that is that in, Beastmaster 2: Through The Portal Of Time has the lead characters traveling from a more mystical world to modern day Earth to stop a mad king and save the more mystical world from annihilation… In, Mortal Kombat, we have fighters from Earth going to a more mystical realm to fight in games in an effort to save the Earth from annihilation!

In the end, this movie is a fun one, and I can’t wait to see parts 1 and 3 now, and rather or not you have seen any of the other, ‘Beastmaster’ series, you might want to try this one out, you might find this to be a fun one… I know I did!