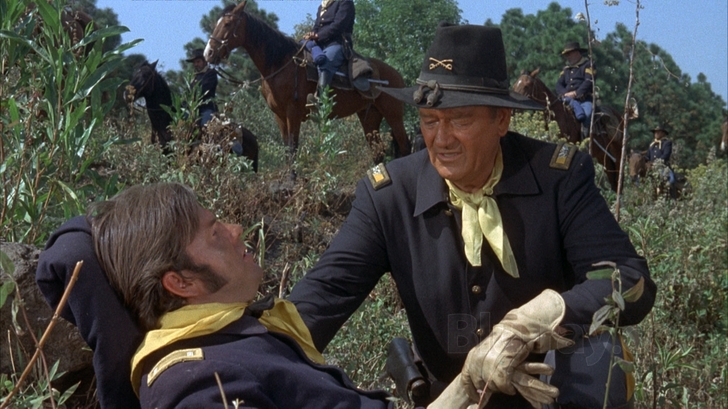 If your looking to pick through a Western star’s career for a movie to re-master for the big screen, then let’s be honest, John Wayne and most of his career would be great to digitize and put back on the big screen!

It is a crying shame that for the most part Western movies have all but disappeared from the Hollywood mainstream… I mean in a lot of ways the actors that made these western films are some of the most defining actors in Hollywood history! A few examples of this of course being: John Wayne (Rio Bravo), Clint Eastwood (A Fist Full Of Dollars), and heck, even to a lesser extent, Steve McQueen (The Magnificent Seven)!

I mean fortunately with all the remakes that are coming out, the few that have been remade have been freakin awesome! But Hollywood should not forget it’s roots, and with old classics being re-mastered also, I think it would be amazing to get the opportunity to get to see, John Wayne riding in to the sunset again on the big screen! and so I thought I would do a blog here for what I think are, ‘5 freakin awesome western movies that were either remade or should be re-stored!’ ‘True Grit’ (2010)… A fun remake starring Jeff Bridges (Tron), and Hailee Steinfeld (She’s A Fox). This movie is remake of a movie that was made 1969 starring: John Wayne (Stagecoach), and Kim Darby (Better Off Dead)!

I was really glad to see this movie, it was a freaking awesome movie, with a great cast, and awesome story line and it also reminded me of all of the classic western movies that are out there… But you know what, I hate to say it, but haven’t seen the original! (A situation I assure you I intend to rectify!)

Never the less, with as good as this movie is, generally speaking remakes tend not to be as good as their predecessors so, if this movie was freaking awesome, then the original is sure to be truly amazing!

Rio Bravo… Definitely a movie that should be back to the big screen!

You know most of us these days I hate to say it, but were either not alive or were to young to enjoy the heyday of the Western movie boom, but have seen these truly classic movies on TV… Well if you’re like me and are a true fan of the Western movie genre, then you would almost certainly love to see such amazing western movie legends back on the big screen… And lets be honest here, there isn’t much more of a truly more iconic western movie that represented the time then, John Wayne’s, Rio Bravo (1959)!

‘3:10 to Yuma’ An awesome good time… But believe it or not is the remake of a classic Western movie from the 1950s!

This awesome was the first movie to start the, (albeit short) western genre craze, but is an awesome remake of the Glenn Ford (Day Of The Assassin), Van Heflin (Airport) classic!

‘The Outlaw Josey Wales’ (1976)… Another great classic that should be given new life on the big screen!

Lets be honest here, rather you are a fan of Clint Eastwood, or are a fan of western movies in the whole, and were looking for something out of Clint Eastwood’s career to re-master and bring back to the big screen, then in all truth this one would probably be one of the best ones to bring back to the big screen! (Being as this one is probably the most iconic and representative of his career as a Spaghetti Western star!)

The Magnificent Seven… A remake in and of itself is just another example of some truly classic movies that should be re-mastered and put back up on the big screen!

A remake in and of itself, (The Magnificent Seven is a remake of an old Akira Kurosawa movie, Seven Samurai (1954)), but this is a pretty awesome movie that has an amazing cast that includes: Steve McQueen, Yul Brynner (Westworld), Eli Wallach (The Good, The Bad, The Ugly), Charles Bronson (Death Wish), Robert Vaughn (Bullitt), and that is just to name a few! And with that in mind if I had to pick a number one to be digitally re-mastered and brought back to the big screen this most definitely would be the one!

Michael Keaton... Batman Forever!
The Evolution of The Original Battlestar Galactica From Original To Remake
John Belushi: The Myth, The Man, The Legend!