Sadly one of the lesser recognized actresses is, Daphne Zuniga (Spaceballs), I mean this actress is an amazing talent what with entertaining audiences on TV from 1992 – 1996 as, ‘Jo Reynolds’ on Melrose Place!

It has been known that some rich families have dark secrets that they try to keep buried at all cost, (because if they were ever to come to the surface they could end up destroying the family!) And the Fairchild family is about to learn this lesson the hard way!

You see, ever since Kelly (Zuniga) was 9 years old she has been having this horrible dream about catching her mother with a man, and the harmful seeming death of an attacker when he is burned alive… What Kelly doesn’t know, is the truth about this dream… And also that the reality of this dream is worse then the truth of her nightmare!

You see Kelly is now a grown woman and in College living a life of some privilege… As a matter of fact she has just met her soon to be college sweet heart, ‘Peter’ (Read), and is just about to join her sorority and all! 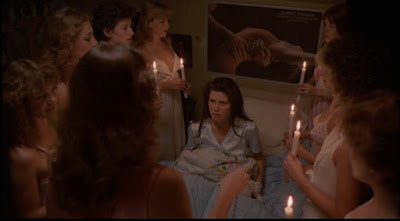 Kelly (Zuniga) as she is jolted out of her nightmare by her sorority sisters!

On the eve of this initiation, her and her sorority sister initiates have been tasked with breaking in to Kelly’s father’s department store and stripping a Security Guard naked and taking his clothes as evidence!

Now of course everything starts off just fine (little do they know that the Security Guard whose uniform they are supposed to steal is actually dead), but the girls make it in to the department store and split up, so that  2 of the girls can distract the guard, while Kelly looks at stealing the guard’s spare uniform!

In the end though, the truth about her dream is about to come true when it is discovered that after the escape of several mental patients from a Texas Mental Health Hospital will finally expose the truth about her nightmares, and uncover a secret that has been suppressed by her mother, (Miles) and her father, (Gulager), that will ultimately destroy not just Kelly’s world, but her family, and her friends, and make, ‘the initiation’ one that no one in the sorority will ever forget!

I love these classic horror movies, they are a lot of fun, and I think if you give this one a chance, you might enjoy this one as well!