Actor James Gandolfini (True Romance)… You might remember him from such classic Movies and TV series as, Crimson Tide (1995) with Denzel Washington (Courage Under Fire) & Gene Hackman (Superman), or Get Shorty (1995) with John Travolta (Broken Arrow) & Rene Russo (Lethal Weapon 3), you may even remember him in one of the most important performances of his career, as, ‘ Tony Soprano’, the mob boss with emotional issues, in the hit HBO TV series, The Sopranos… 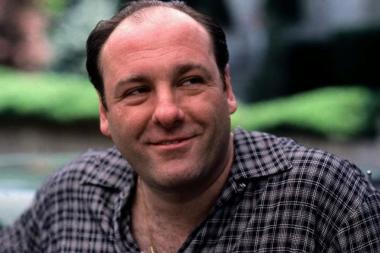 Unfortunately though we were sad to learn that on June 19th 2013, that Mr. Gandolfini passed away of an apparent heart attack while on vacation in Rome!

Born in 1961, this amazing talent got his start like a lot of the Hollywood A list talent… In a classic low budget B horror movie… This movie being, Shock! Shock! Shock! (1987)!

In this insane horror romp, which was helmed by: Arn McConnell, and Todd Rutt (Saturday Night Live) Mr. Gandolfini played the role of an, ‘Orderly’!

But it wasn’t really till about a few years later when this little known at that time talent was given the opportunity to play a small un-credited role in the 1991 smash hit, The Last Boy Scout, as one of the henchmen in the movie, which helped really begin to light the way toward his path to super stardom!

You see not long after that Mr. Gandolfini would be cast in what some could say is one of the defining romantic crime movies of the 1990s… And I hate to say it (although it is an incredibly awesome movie), is that this could also be said to be a very defining movie for a lot of the talent that worked on it, and that movie is… True Romance (1993)!

James Gandolfimi as, ‘Virgil’ and Patricia Arquette as, ‘Alabama Whitman’ as they are just beginning a very intense conversation!

From there on Gandolfini’s career would continue to skyrocket higher and higher, and would continue to wow audiences through out the 90s, what with, besides working with John Travolta on, Get Shorty, also worked with him on, A Civil Action (1998) as, ‘James Love’ and, The Taking Of Pelham 1 2 3 (2009), as, ‘The Mayor’, as well as working with him on, She’s So Lovely (1997) and Lonely Hearts (2006), He would also end up working with Demi Moore (G.I. Jane) and Alec Baldwin (The Hunt For Red October) on the 1996 Dramatic thriller, The Juror! After that Mr. Gandolfini  would go on to work on Midnight In The Garden Of Good & Evil (1997), a movie in which Mr. Gandolfini would play along side, John Cusack (High Fidelity) and Kevin Spacey (House Of Cards).

Near the beginning of the new millennium though Mr. Gandolfini would go on to play a role that would define his career in a lot of aspects and is probably the role that he is most remembered for, as the mob boss with emotional baggage in the hit 2000s HBO TV series, ‘The Sopranos’!

In this show James Gandolfini plays, ‘Tony Soprano’, a mob boss, a big and powerful man whom after he gets hit with a panic attack, ends up going to see a shrink, and it ends up changing his life in ways that he would never expect!

When, The Sopranos ended in 2007, do you think this stopped this mega star? Hardly!

He would go on to work with some amazing talent that includes: Kristen Stewart (Twilight) in the movie, Welcome To The Rileys (2010), Tim Robbins (The Hudsucker Proxy), in Cinema Veritae (2011), Joel Edgerton (The Thing) in Zero Dark Thirty (2012), Steve Carrell (The Office) in, The Incredible Burt Wonderstone (2013), and most recently with Tom Hardy (Star Trek: Nemesis) and Noomi Rapace (Prometheus) in the up coming movie, Animal Rescue (2014)!

We here at ABM would like to send our condolences to the family of James Gandolfini, but are happy in the knowledge that his memory will live on forever in the hearts and minds of his friends, his family, as well as the legions of fans that he has all over the world!

For more information on the work of this truly amazing actor, please check out this cross section of his career:

A scene between, ‘Alabama’ (played by: Patricia Arquette) and, ‘Virgil’ (Played by: James Gandolfini) in True Romance (1993):

A scene between Dr. Elizabeth Melfi (Played by: Loraine Bracco) and Tony Soprano (Played by: James Gandolfini) in the hit HBO TV series, The Sopranos:

The trailer for, The Incredible Burt Wonderstone (2013) with James Gandolfini in it: